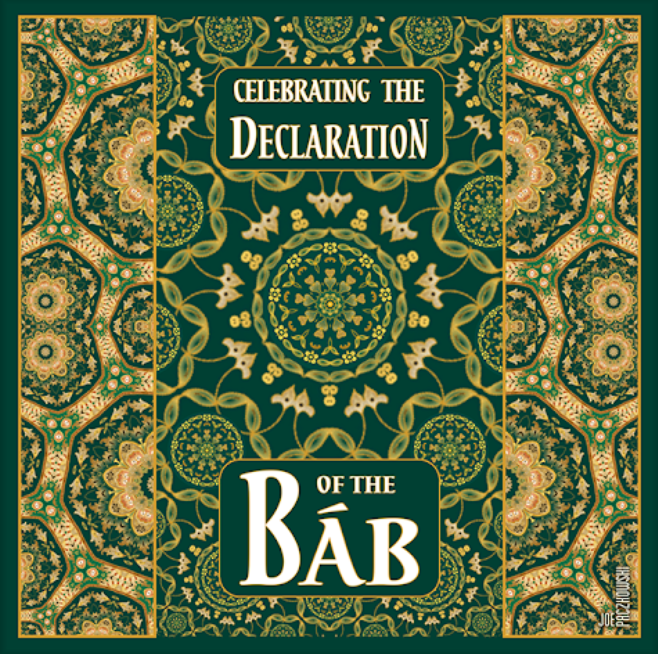 Declaration of the Báb. Bahá’í commemoration from about 2 hours after sunset on 22 May of the Báb, as co-founder of the Bahá’í faith, heralding in Persia in 1844 the arrival of Baháʼu’lláh as a new Messenger from God. This occurred on 8 ‘Aẓamat (عظمة, Grandeur) in the Bahá’í calendar that the Báb inaugurated and numbered from that year. Bahá’ís view the Báb as the Messenger of God who had a role that can be likened to that of John the Baptist, who foretold of the coming of Christ, in heralding the coming of the latest Manifestation of God, Baháʼu’lláh. The Bahá’í story dates from 1783, when the learned Shaykh Ahmad-i-Ahsa’i began at the age of 40 to travel through Persia teaching that a great day was drawing near, the day that would see the advent of the Qa’im, the Shi‘i Islam Promised One. After his teacher Shaykh Ahmad’s death in 1826, his pupil and eventual successor, Siyyid Kazim-i-Rashti, continued to spread the word of the advent of the Promised One. Siyyid Kazim enlisted the support of his well-respected pupil, Mulla Husayn, and shortly before his death in 1843 Siyyid Kazim sent his pupils out in search of the Promised One. Mulla Husayn on 22 May 1844 was unexpectedly greeted in the city of Shiraz by the young Siyyid Ali Muhammad, who claimed to be the Promised One, the Báb (the Gate), and Mulla Husayn became His first disciple. Although the Báb was indeed the Promised One foretold by Shaykh Ahmad and Siyyid Kazim, He declared that He was but the Herald of another Messenger (Baháʼu’lláh) who would soon appear, and the power of whose revelation would far exceed any previously sent down by God. The day of the Báb’s declaration is now celebrated by Bahá’ís and their guests of all faiths and none around the world as one of the greatest and most significant of all festivals. It is one of 9 Holy Days on which Bahá’ís do not attend work or school. Image: scottsdalebahai.org.

Prayer O my God, Who art the Maker of the heavens and of the earth, confer Thy blessings upon the Messengers, the holy ones and the righteous. Grant that we may reap the benefit of our lives in this world and in the next. Open to our faces the portals of Thy grace, and graciously confer upon us Thy tender mercy and bestowals. Glory be to Thee, O King of eternity.

Pentecost (Whitsun, 50th, Πεντηκοστή, Descent of the Holy Spirit). 50th day after Easter in Western Churches, commemorating the Holy Spirit coming down to earth in flames. The symbols of Pentecost are those of the Holy Spirit and include the dove, the wind, the breath of God and flames. The Acts of the Apostles tells how the followers of Jesus found themselves speaking in foreign languages, inspired by the Holy Spirit. People passing by at first thought that they must be inebriated, but the Apostle Peter told them that he and the other Apostles were full of the Holy Spirit. Pentecost is a special day for all Christian communities, but it is emphasised particularly by Pentecostal churches, which preach that the Holy Spirit is available to believers during all of their services. The central Christian belief that God is three in one: Father; Son; and Holy Spirit, is at the heart of the Christian teaching of the nature of God and is central to preaching and teaching both at this time and on the following Sunday, the 30 May Trinity Sunday. It is the belief in the divinity of Christ and the reality of the Holy Spirit that separates the Christian faith from other monotheistic religions. However, there are nontrinitarian Christian denominations such as: Unitarians; Christadelphians; The Church of Jesus Christ of Latter-day Saints; Jehovah’s Witnesses; and Christian Scientists. Pentecost is seen as the birthday of the Church, since it was when the Disciples of Jesus first proclaimed the Gospel after receiving the gift of the Holy Spirit. The alternative name of Whitsuntide comes from the custom of converts presenting themselves for baptism dressed in white. The Amish celebrate Christian holidays, but Pentecost may not be celebrated in all communities. In the Orthodox Churches, Pentecost is one of the Great Feasts and will be on 20 June with its Afterfeast on the Orthodox Whit Monday the following day. Image: themiscellany.org.

Zaratosht-no Diso. Zoroastrian Shenshai, Parsi sorrowful anniversary of the death of the Prophet Zarathushtra, who was assassinated at the age of 77 whilst praying in the sanctuary. It is normally customary to visit the Fire Temple for religious discourses focussing on the life and works of the great Prophet, to participate in special remembrance prayers to him and to the Fravashis (guardian spirits of departed ancestors), and to ponder upon the Gathas (Hymns) of Zarathushtra, which embody his eternal message to humanity. Although the day that Zarathustra left the earthly, mortal life is an occasion of sadness, there is an eternal optimism at the heart of Zoroastrian belief that shines through even the darkest of days. Persian Zoroastrian anniversary 26 December. Image: parsi-times.com.