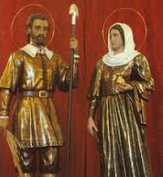 St Isidore the Farmer (the Farm Labourer, San Isidro Labrador, Isidro de Merlo y Quintana) (c1070-1130). Catholic and Philippine Independent Churches Feast Day commemorating the death of the Madrilenian (Madrileño) farmworker known for his piety toward the poor and animals. In the morning before work, he would usually attend Mass and was always late for work, his master, Juan de Vargas, finding Isidore at prayer whilst an angel was doing the ploughing for him or flanked by 2 angels so that his  work was equal to that of 3 workers. One day, he took home more hungry people than usual and there soon was no more stew in the pot but he asked his wife to check again, and she was able to spoon out enough stew to feed them all. Isidore appeared to the King of Castile in 1212 to show him a hidden path by which he surprised the Moors and gained the victory of Las Navas de Tolosa. Throughout history, members of the royal family would seek curative powers from the saint and he has 438 miracles attributed to him. Isidore died in Madrid and in 1696 his relics were moved to the Royal Alcazar of Madrid to intervene on behalf of the health of the King of Spain. In 1769, the King had the remains of St Isidore and his saintly wife Blessed Maria Torribia translated to the San Isidro Church in Madrid, the King having the key to the sepulchre that can only be opened by the Archbishop of Madrid on the King’s authority.  Many towns venerate Saint Isidore and his wife with processions in which the fields are blessed. The story of St Isidore is a reminder of the dignity of work and of ordinary life leading to holiness. Venerated in Roman Catholic, Aglipayan Churches, Anglican Communion. Alternative Feast Days 25 October, 22 March. Patron of Madrid, Leon, Zaragoza, Seville, Castalla, Estepona, Orotava, Valdepiélagos, San Isidro Argentina, Cuz Cuz Chile, Carampa and Lima Peru, Angono, Rizal The Philippines, Sabana Grande Puerto Rico, El Gobernador, Jalisco, La Ceiba Honduras, agriculture, farmers, peasants, day labourers, bricklayers. San Ysidro, California and San Ysidro, New Mexico were named after him. Image: en.wikipedia.org.

Virgin St Mary of the Harvest (St Mary for Good Crops and Harvest). Feast Day with its origins in an agricultural feast that arose from the needs of farmers to seek God’s help for a fruitful harvest. The farmers were at the mercy of the elements and depended on sufficient rain and good weather, thus seeking God’s assistance and begging for the intercession of Mary for their crops. St Ephrem speaks of Mary in this context when he says that Mary became of the field who received the grain of wheat in her womb and this grain of wheat, Jesus Christ our Lord, giving life to the world. Through the harvest we receive the gifts of bread and wine that become for us the Body and Blood of Christ in the Eucharist. Image: neamericandiocese.org.

Prayer Alleluia! Our Lord Jesus said “I am the Bread of Life. From the Father I was sent as Word without flesh to give new life. Of the Virgin Mary I was born, taking flesh as man. As the good earth receives a seed, her womb received Me. Priestly hands now lift Me high above the altars.” Alleluia! Our gifts, Lord, receive. Amen 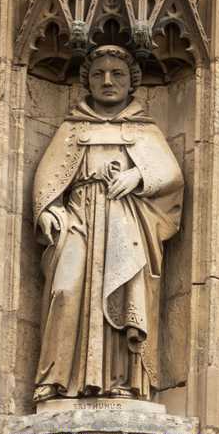 St Bercthun of Beverley (Britwin of Beverly, Brithunus) (d733). Feast Day for English Benedictine monk who was a disciple of St John of Beverley, who had founded c700 the town of Beferlic (Beverley) during the time of the Anglian kingdom of Northumbria by building the Beverly monastery, of which Bercthun became the 1st Abbot. The 2nd Abbot St Winewald is credited with making the monastery a centre for spiritual and cultural growth. After a period of Danish control, the town passed to the Cerdic (Cerdicingas) dynasty and gained prominence in terms of religious importance. It continued to grow under the Normans and was a place of Medieval pilgrimage that became rich from the pilgrims who came to the Abbey to venerate John of Beverley. After the Reformation, the stature of Beverley was much reduced but it is still famous as a minster town, Beverley Minster having been an Anglo-Saxon teaching church. Image: en.wikipedia.org.