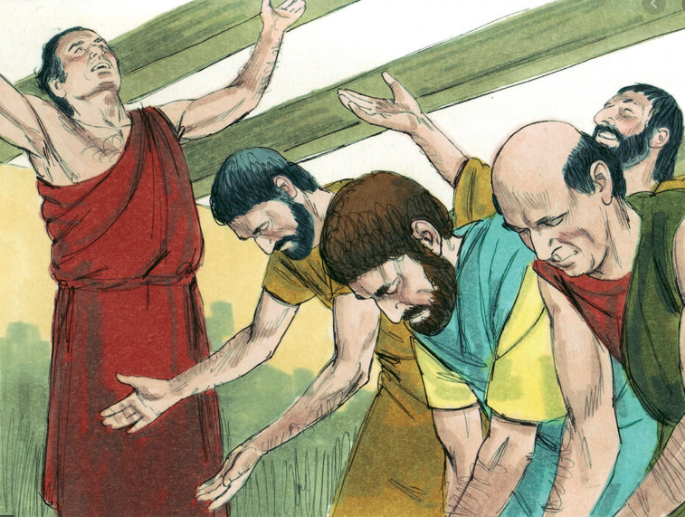 St Manahen (Menachem). Roman Catholic Church Feast Day for 1st-Century Christian teacher to the Greeks in the Church at Antioch. He had been brought up (συντροφος, collactaneus) with the Roman-appointed ruler identified in the New Testament as King Herod (Herod Antipater, Antipas), who never held the title of king. Manahen became a Disciple of Jesus with Joanna, the wife of Herod’s steward. In 39, Antipas left for Rome to gain the favour of Caligula but instead received an order of perpetual exile. In 42, Manahen was a founder of the Antiochene Church along with other Jewish Christians who had been dispersed in 34 by the persecution that arose when St Stephen was martyred. According to the Acts of the Apostles, in 45 Manahen was one of the prophets and teachers who, under the influence of the Holy Spirit, laid hands on Paul and Barnabas and sent those two Apostles on the 1st missionary journey from Antioch to Cyprus. Orthodox Church Feast Day 23 May. Image: en.wikipedia.org.

St David I of Scotland (Dauíd mac Maíl Choluim, Rí Alban, Rex Scottorum, Prince of the Cumbrians) (c1080-1153). Feast Day commemorating the death of the pious youngest son of Queen St Margaret of Wessex and grandson of King Duncan I. David was crowned at Scone, abhorred homage and was noted for his religious devotion and generosity to the poor. He endowed the founding of several dioceses and more than a dozen monasteries and patronised various new monastic orders. Monasteries became centres of foreign influence and the Cistercian ones in particular introduced new agricultural practices. David was independence-loving and tried to build a Scoto-Northumbrian realm. To enlarge his kingdom, he supported his niece Matilda’s claim to the English throne against that of King Stephen, who was married to another niece. Although, at the 1138 Battle of the Standard, English forces defeated David’s army, David’s son Henry was given the Earldom of Northumberland and David kept Carlisle and Cumberland, effectively fulfilling all his war aims. The Battle of the Standard is thus remembered as the centre of the English position was marked by a mast  bearing a pyx (pyxis, πυξίς) containing the consecrated host (Eucharist) and mounted upon a cart, with the consecrated banners of the Minsters of Durham, York, Beverley and Ripon flying from the mast. David defended the Scottish church’s independence from claims of overlordship by the Archbishops of York and Canterbury. As David was nearing death in Carlisle, he said “Let me think about the things of God, so that my spirit may set out strengthened on its journey from exile to home to stand before God’s tremendous judgement seat.” He was buried at Dunfermline Abbey. Venerated in Roman Catholic Church, Anglican Communion although never formally canonised. Major shrine Dunfermline Abbey, Fife. Patron of Scotland. Image: en.wikipedia.org.

Naomh Gobban (St Gobhan, Gobhnena) (b6th-Century). Alternative Feast Day for early Christian Irish Abbot of Killamery monastery in County Kilkenny. A disciple of St Fursey, Gobhan established his monastery in 632 and the 9th-Century Killamery High Cross north of the graveyard is part of the western Ossory group of crosses. The boss in the middle of its wheel-head is surrounded by interlacing snakes with an open-mouthed dragon above it, giving it the name of the Snake-Dragon Cross. The western face has a sun swastika at the centre and also depicts Adam and Eve, a stag hunt and a chariot procession. Noah and John the Baptist are also depicted. On the base, an inscription reads “OR DO MAELSECHNAILL”, (a prayer for Máel Sechnaill, the 9th-Century High King of Ireland. Local people formerly touched the cross’s capstone to cure headaches. There is also a holy well, St Goban’s Well. Feast Day 6 December. Patron of Killamery, St Laserian’s Cathedral. Image: © Brian T McElherron.

Prayer May there always be good works for our hands and adequate recompense to meet our true needs, may the sun always shine in our hearts and fine weather follow the rain, may the hand of friendship always be near us, and may God fill our hearts with gladness. Amen